Thanks to Cluster LEDs with a higher light output we are now able to provide theEC-1000 series as a second generation of our rear-projection cubes with enhanced brightness level.

To meet these higher demands, we have fitted the projectors of our proven EC rear-projection cubes with new Cluster-LED technology. In comparison to standard LEDs these provide a remarkably higher light output. The cubes from the EC-1000 Series are available in SXGA+, UXGA, Full HD and WUXGA.

The new projectors in the cubes from the EC-1000 Series feature new Cluster-LEDs, where the active LED surface is divided into several sections. Besides higher light output this also guarantees that in the event of a failure of a single LED section, the image is preserved in almost its entire condition.
As with all other eyevis LED cubes, the EC-1000 Series continues to rely on our innovative heatpipe cooling system, which has proven its reliable and highly effective function in thousands of cubes in diverse operating conditions. In addition to that, our heatpipes require absolutely no servicing and contain no toxic liquids.

Although the cubes from the EC-1000 Series have a higher light output, power consumption has not risen. For typical applications like in control rooms, the power consumption is even up to 20% less compared to values of our standard cubes. At the same time the heat dissipation of the cubes could be lowered, which reduces the demands on the HVAC systems in control rooms. Thus, the devices from the EC-1000 Series are not only brighter, they also save energy!

QUALITY „MADE IN GERMANY" 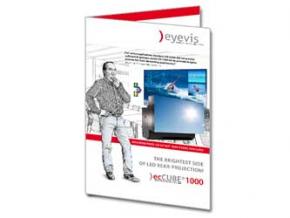